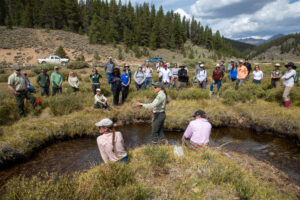 Ashley Hom, a Forest Service hydrologist and local project lead, speaks to project partners and donors at Trail Creek in an upstream area that has not been restored on Sept. 13. Here, the stream is still restricted to a single channel.

Small streams and pools dotted the restoration site at Trail Creek where human-made beaver dams were installed late last summer. The vegetation was a healthy green and the beavers, who had been absent for two decades, had returned and were hard at work constructing a lodge of their own.

A short dusty walk up the road revealed a completely different landscape. There, the stream was still restricted to a single channel. The wetland, starved of moisture, was hard and crunchy, and the riparian plants and willows next to the stream had begun to transition to sagebrush.

On Sept. 13, project partners, local conservation groups and visitors from around the state and country gathered at the Taylor Park wetland restoration site at Trail Creek. The project is situated at the headwaters of the Gunnison River, which has been heavily influenced by years of drought across the region. Work to restore the riparian and wetland habitat is part of a long-term project to boost the health and quality of the community’s water resources above Taylor Reservoir.

“It’s spongy and wet and it feels right. It feels like a wetland,” said Forest Service Hydrologist Ashley Hom, a local lead on the project.

The restoration work began in the fall of 2021, fueled by partnerships between the National Forest Foundation, the U.S. Forest Service, American Rivers, High Country Conservation Advocates and community volunteers. The pilot project’s success has attracted the attention of the Forest Service’s Washington office, the Colorado Water Conservation Board and large corporate funders such as Coca-Cola. The funding will allow partners to continue the work in 2023.

The team is not creating wetlands, but simply restoring what was historically present in the area when beavers roamed the landscape. The creation of beaver dam analogues attenuates runoff during the spring and slowly releases the flow over the summer and into the fall. The gradual release of water restores the historic flow regime — improving the landscape’s resistance to drought and wildfires. The hope is that the beavers, a keystone species, will return and continue the work themselves.

“It’s a nature-based solution, it’s a natural-climate solution, and it’s relatively, when you look at the costs, a very effective use of funds when it comes to attenuating water and restoring wetlands,” said Joe Lavorini, southwest Colorado program manager with National Forest Foundation, a key partner in making the project possible. “There’s no bigger issue in the West right now than trying to increase water supply and keep water on the landscape.”

The project uses low-tech process-based restoration techniques that focus on mimicking nature. Although Colorado Parks and Wildlife was the first agency to conduct this kind of project in the valley, Trail Creek became the “poster child” of an ideal location, Hom said. It sits almost entirely on federal lands and does not conflict with agriculture, infrastructure or water rights — all factors that can quickly complicate the logistics of a restoration project.

Since 2021, the restoration team has improved 1 mile of Trail Creek through the installation of 150 beaver dam structures, with direction of EcoMetrics and Arable Earth, experts on process-based restoration. Hundreds of volunteers pitched in, rewetting approximately 30 acres of historic wetlands and planting more than 200 willows. After learning lessons and gaining momentum, it’s also the ideal location to bring people who are skeptical of these kinds of projects due their ability to change the way water flows, Hom said.

This work is spreading across the West as states look for new ways to mitigate the impacts of long-lasting drought conditions. Beavers, once considered a nuisance, are the superstars of the show.

“Everybody is talking beavers right now, it is the buzz across our country,” Hom said.

Coca-Cola, a longstanding partner with the Forest Service, The Coca-Cola Foundation and Swire Coca-Cola — which makes and distributes coke products across 13 western states — collectively gave over $200,000 toward the project for work in 2022 and 2023.

According to Jon Radtke, Coca-Cola North America’s water sustainability program director, one of the company’s goals is to return the same amount of water to nature and the community that it uses in its beverages — focusing on some of the most stressed watersheds that it operates in, including the Colorado River Basin.

“We want to see this work expand,” Radtke said. “I would like to see what we can do to replicate this and other watersheds nearby and maybe all across the basin.”

Public buy-in will be instrumental in expanding the use of low-tech restoration techniques like beaver dam analogues across the county, Hom said. But for now, the team will stay focused on restoring Taylor Park, while educating the community about the benefits of “rewetting the sponge.”

“I think the impacts could be substantial in the way of drought resiliency … I believe we can get there if we can do these projects at a broader scale. Right now, we’re just kind of going slow to go fast,” Hom said.