A tale of ‘Two Bridges’

Morgan Raspanti | Special to the Times 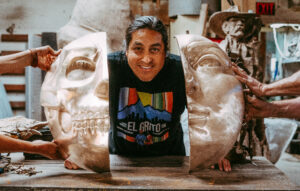 On Wednesday, Gunnison-based playground equipment manufacturer, ID Sculpture, sent the last of three flatbed semi truck shipments of concrete castings to Denver for the first phase of a $1.5 million public art project called “People’s Bridge of the Sun.” The ID Sculpture team was approached by Denver-based artist, David Ocelotl Garcia, to help bring his designs to life with castings.

After three-months of collaborative design and production, the pieces are due to be assembled along the new 51st Avenue bridge in a permanent public art installation, connecting neighborhoods along the South Platte River to the National Western Center (NWC).

The NWC Two Bridges Public Art project is a small fraction of a larger, decade-long redevelopment plan to transform the longtime home of Denver’s National Western Stock Show into a year-round, indoor and outdoor, 250-acre hub of food, art and culture.

ID Sculpture founder and owner Ian Glas said the company dabbles in public art each year, but less than 1% of their project count and revenue comes from it.

Glas moved to Gunnison in late 2004 and launched the one-man operation out of his garage that would eventually become ID Sculpture. He said working with playgrounds is a more straightforward architectural process in comparison to the nuances of public art.

According to Glas, a typical public art project at ID Sculpture is “a perfect union of our standard product, which is sculpted, play features.”

The NWC Two Bridges project, however, differs from ID Sculpture’s standard play-friendly replications of objects like castles, dragons, boulders and trees, in its design, scale and scope. Even so, Glas said, “a large portion of this thing is precast concrete, which is right up our alley.”

ID Sculpture Project Manager Sean Monahan said the team knew they could do this project because of their expertise in concrete, but the learning curve was steep.

“We had no idea how at first, we knew we were going to make molds and that was it. And so it took a lot of thinking on behalf of Ian,” he said.

One remarkable aspect of the project is the interplay between materials, community, nature, design and production. Garcia, who has an extensive portfolio of exhibited and commissioned work, including a recent installation at the Denver-based Meow Wolf, describes the Two Bridge project as a “nature-inspired design, drawing from organic symbolism and tribal philosophy.”

Garcia’s website describes the project’s goals for building community, since “the two bridges are located in a traditionally underserved area of Denver … the creation, installation and presence [will] help give voice and visibility to the stories of these neighborhoods.”

Garcia said the bridge has lots of layering concepts and their interpretations ultimately come down to how individual viewers chose to view them. Yet, the underlying fabric DNA, goes back to who he is, and where he comes from.

“My Mexican heritage is really inspiring to me, and art gives me a way to share where I come from and who I am,” he said. “Art is just the expression of the person making it; it’s the exploration of who you are as a human being.”

“So many people put their hands on this arch, literally,” Garcia said.

Garcia said he believes materials absorb energy from nature, and especially from human hands. Operating on the philosophy that art is energy, Garcia finds comfort in the precast concrete being built in Gunnison, as it will carry the nature of Gunnison with it, while being a bridge for community in Denver.

“There are very few companies with the capacity to do our scale,” said product designer Collin Macdonald. “Part of this process was proving to ourselves and to the greater Denver community that we are one of those companies … I’m really happy with the way that it’s turned out.”