Sunshine for our seniors 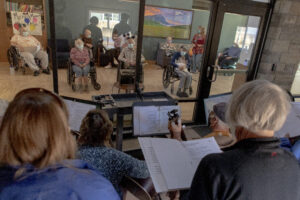 The soft rhythm of “Amazing Grace” trickled from the speaker at the front of the room at the Gunnison Valley Health Senior Care Center, while the audience — at least 400 years of life between them — absorbed each sweet note.

Some sat in large, stuffed chairs swaying their heads back and forth, while others were lined up in wheelchairs by a glass wall, eyes fixed on the music-makers who stood just a few feet away. A single pane of glass separates the two groups, but for an hour each Friday, the barrier melts away.

Sixteen valley residents, wrapped in jackets and scarves, clutched old songbooks and held their instruments tightly for each coming line of music. These musicians call themselves the “Sunshine Singers,” and spend each Friday afternoon at the Senior Care Center, strumming and singing some of the most well-loved songs in the county for a small, but appreciative, audience. This ritual has been occurring for over 15 years.

Gunnison Resident Bill King started the Sunshine Singers two decades ago. His mother lived in the memory care unit, and each week he gathered a few friends to play for her and other residents, said Senior Care Center Life Enrichment Coordinator Katy Walck.

From there, the weekly hangout grew over the years to include 10-15 musicians who donate their time each week for older Gunnison residents. Many in the group have had parents pass through the care center, and continue to play in their honor, Walck said.

“The true meaning of it is just the time, talents and treasures given from the singers to the residents,” she said. “They play with all their hearts.”

“We try to pick songs that are familiar to the folks that are in the Senior Care Center, like oldies from back in the 40s and 50s,” Anderson said.

The group doesn’t discriminate when it comes to selecting genres, and will play everything from gospel music and old military songs, to Bob Dylan and Johnny Cash’s biggest hits. But every week, the roster starts and ends the same way — opening with “You are My Sunshine,” and closing out with “When the Saints go Marching in.”

“He writes about his own life and he’s an adventurous kind of fellow,” Sibley said. “He served during World War II and was a captain of a small ship.”

These relationships are part of why the program is so special, Walck said.

“It’s the interpersonal relationship they’ve built over the years with the singers that makes the program so meaningful,” she said.

The benefit of music for older individuals extends beyond the simple joy of hearing a familiar tune. Anderson said every now and then he catches a glimpse of a connection through music.

“I’ve seen folks come in from the Alzheimer’s unit who didn’t know their wife or husband or what day it was, but when we started singing songs they knew, something in the back of their memory came out and they could sing along,” he said.

During the worst of COVID, the Sunshine Singers would stand outside in the brutal cold and play for residents. But when longtime resident and group member Butch Clark donated a speaker and sound system, the music created outside could travel indoors to warmer ears. That speaker now sits at the front of the room every week, and allows the singers to play in an adjacent room while residents sit safely on the other side.

Sibley said the weekly singing sessions benefit him as much as they may benefit the residents.

“I always felt better after that hour than before, partly because it was giving something back, but I was also getting something in,” he said. “It was recharging me a little bit and most of us who sing would say about the same.”

Member Maryo Ewell agreed that the uplifting effect of music is returned to the musicians.

“I have found that in the act of trying to bring a little joy to others, I came home rejuvenated, refreshed and happy,” she said.

Perri Pelletier, who has been in the group for 16 years, originally joined when King invited her to play with the group so she could use her violin. The habit stuck, and she eventually started bringing her young children and husband to the weekly event.

“The energy from the seniors is wonderful. When we get smiles from them, when we have repeat customers — we know it means something to them,” she said.

The group has continued to evolve as members come and go. Rehearsals are non-existent — the only criteria is a willingness to play, a love of music and at least some ability to read sheet music. Sibley said the group can be summarized by Ewell’s frequent categorization of the group as the best example of anarchy she knows that works.

“We’re not the greatest musicians in the world,” Anderson said. “But thankfully we have a forgiving audience.”