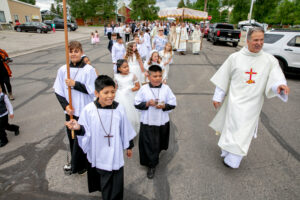 On Sunday, Father Andrés Ayala-Santiago led a procession down the streets of Gunnison to celebrate the beginning of a National Eucharistic Revival, a three year initiative to reunite Catholics across the country in the holy sacrament of the Eucharist.

The National Eucharistic Revival launched on June 16 on the annual feast of Corpus Christi, a Roman Catholic festival that honors the presence of the body (corpus) of Jesus Christ (Christi) in the Eurcharist.

Sunday marked the start of the three-year revival designed to bring Catholics closer to Jesus through the Eurcharist — commencing with processions in dioceses and parishes, not only in Gunnison, but around the country. The revival will conclude with a National Eucharistic Congress in 2024 in Indianapolis, Indiana, a gathering expected to draw 80,000 faithful to worship the Eucharistic Lord.

St. Peter’s Catholic Church welcomed all parishioners from Gunnison, Crested Butte and Lake City, as well as the public, to come together once again and celebrate the “most beautiful mystery” of the Catholic faith, Ayala-Santiago said.

After Sunday mass, parishioners gathered outside to begin the procession. Covered by a colorful canopy made in Mexico, Ayala-Santiago carried the Eurcharist in a monstrance — a ceremonial vessel — through town, up Ohio Street to Main and Tomichi. The celebration ended with a final benediction, blessing those gathered with the Eucharist, followed by food and music at the church.

“We believe in the power of prayer,” said Kay Flint, liturgy coordinator and sacristan. “We had a lot of people praying for us, that we would be able to do our procession and benediction without getting rained on. And God allowed us to do that.”

First Communion children also joined the procession, dressed in white to celebrate their first time receiving the sacrament. Ayala-Santiago requested community members to dress in either white or black to promote bridges of trust throughout the valley and beyond.

Sunday was St. Peter’s first big event since the start of the pandemic as well as an invitation for community members to return to church.

“After COVID, we have a lot of people that are still in fear and stopped going to Mass … with this revival, we wanted to motivate the Catholic faithful to come back. The Lord is here and that the Lord stayed with us,” Ayala-Santiago said.

Change Location
Find awesome listings near you!
You have 3 free stories remaining!
Please login or subscribe to continue reading!