Blackstock on a warpath 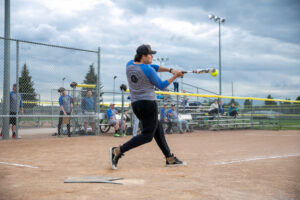 The first set of games pitted the Bistro against the Pie Slammers, while Mike Cribari’s team took on Duck Tape on the neighboring field. The first round resulted in a win for both the Bistro and Cribari. The score at the end of the Blackstock’s first game was a landslide, 32-17, while Cribari eked out a win against Duck Tape, 21-14.

“All my guys did pretty good,” Cribari said. “Everybody hit the ball well.”

During the game against the Pie Slammers, Logan Collie of the Blackstock team, caught a big hit in the outfield by diving for it as it came down, resulting in a cheer from the stands as well as the dugout. Collie then proceeded to hit a home run with numerous bases loaded in a later inning.

After the end of the first two games, Blackstock faced off against Mike Cribari’s team, and the Pie Slammers played Duck Tape.

The game got off to a quick start with Cribari climbing ahead by 5 in the first inning. This gap was bridged by Blackstock, and the game began to turn in their favor. By the end, Blackstock maintained its undefeated season, defeating Cribari 32-17.

The second round of the tournament, and the final games of the season, took place on Wednesday night, but results were not available by press time.

Change Location
Find awesome listings near you!
You have 3 free stories remaining!
Please login or subscribe to continue reading!